On Sept. 14, Amazon will introduce a new and improved line of Kindle tablets, with a major overhaul to its successful Kindle Fire line. The first Kindle Fire helped Amazon capture 22 percent of U.S. tablet sales, with a 7-inch screen and a $199 price point that was much cheaper than the entry point of Apple’s $499 iPad (Apple now sells its entry level iPad at $399).

And perhaps the biggest news out of Amazon is a new Kindle Fire HD tablet, designed to go after more expensive tablets from Microsoft, Samsung and Apple. What is essentially the original Kindle Fire goes for $159.

Now onto the new stuff:

For $199, customers can get a revamped 7-inch Kindle Fire with a faster HD display, faster WiFi, Dolby audio and 16 gigabytes of storage. You also get a front-facing camera for video calling. There are dual Dolby speakers for a true stereo audio experience.

Pay $299 and you step up to an 8.9 inch screen with resolution equivalent to a wall hung HDTV (1920×1200) and a more powerful processor and graphics engine.

Finally, there’s the Kindle Paperwhite, an e-reader with a clearer “paperwhite display.” It’s supposedly sharper than any e-reader with 25 percent more contrast and 62 percent more pixels. It’s yours for $179 for a 3G version and just $119 for the WiFi.

And it’s clear than Amazon is most excited about its $500 tablet.

“We’re taking on the most popular price point for a tablet, $499, but doubling the storage and incredibly, adding ultra-fast 4G LTE wireless,” said Jeff Bezos, Amazon.com Founder and CEO. “Kindle Fire HD is not only the most-advanced hardware, it’s also a service. When combined with our enormous content ecosystem, unmatched cross-platform interoperability and standard-setting customer service, we hope people will agree that Kindle Fire HD is the best high-end tablet anywhere, at any price.”

Bezos wrote an open letter on the company’s website, touting the new devices. Read on: 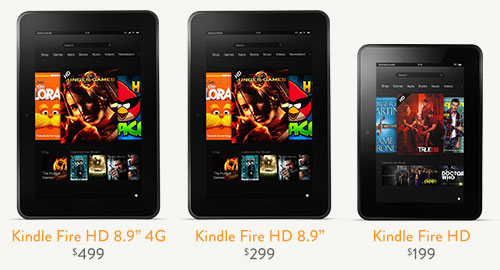 Kindle Fire HD 8.9″ 4G isn’t just the best tablet for the price, it’s the best tablet. $499 now gets you a large-screen HD tablet with a stunning 8.9″ display, exclusive Dolby audio, dual stereo speakers, the fastest Wi-Fi, ultra-fast 4G LTE wireless, plus our new unprecedented $49.99 one-year 4G data package. Customers save hundreds of dollars in the first year compared to other 4G tablets. Kindle Fire HD 8.9″ is also available in a Wi-Fi only model for $299.

You’ll do a double take when you see Kindle Paperwhite—we’ve added 62% more pixels and increased contrast by 25%, so whites are whiter, and blacks are blacker. We’ve also added a revolutionary built-in front light for the perfect reading experience whether you’re out at the beach or at home in bed. Kindle Paperwhite starts from just $119. Kindle Paperwhite 3G is available for $179 with free 3G wireless—never pay for or hunt for a Wi-Fi hotspot. We’ve also updated our smallest, lightest Kindle with improved fonts and 15% faster page turns—it now starts at just $69.

Kindle Fire HD and Kindle Paperwhite are each in a class by themselves when it comes to hardware—there’s nothing better. But the real magic is that they are also a service. When combined with our enormous content ecosystem, unmatched cross-platform interoperability and standard-setting customer service, we hope people will agree these are the best tablets and e-readers anywhere, at any price.

Thank you for being a customer,